In June 2022, we posted an experiment to Hacker News, Reddit, and Twitter to test the claim that Bionic Reading enables you to read faster without any loss of comprehension. Part 1 of this series described in-depth the motivation, the claim, and the experiment design. In this Part 2, we're jumping right into the results.

Participants were asked to read two 1,000 word essays divided into two halves resulting in articles 1A, 1B, 2A, and 2B. The first font was randomly selected for each tester (either Literata plain, or Literata with Bionic Reading applied) and then alternated from there.

When the cross-matrix reading speeds for each font are averaged, we have a pair of reading speeds per participant that can be fairly compared against one other, isolating the font as the independent variable. We also asked three multiple choice questions at the end of each article half to control for reading comprehension.

As with anything on the internet, completion rates followed a predictable funnel pattern. 3,334 participants completed article 1A and this sample gradually dwindled to 2,074 participants who completed all four. 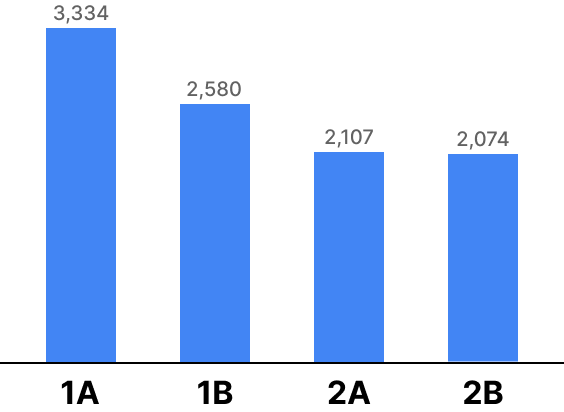 There are advanced statistical techniques, such as a random effects model, that can take advantage of all the data regardless of whether each participant completed all four halves or not. But for the sake of interpretability, we've decided to disregard any incomplete entries resulting in an initial sample size of n=2074 — still more than enough data to power a robust statistical analysis.

Also as with anything on the internet, there is some junk data which must be removed.

This data preparation resulted in a final dataset with n=1916.

We appreciate that outlier removal is a delicate process that risks introducing bias to the dataset, but we feel confident based on our observing of participants and our subject matter expertise that these entries are invalid. Further, we've made publicly available the anonymized raw data (pre-munging) here in the event you wish to apply your own data preparation steps to run your own analyses or to check our work.

As mentioned above, we can now average each participant's results for each font to derive a pair of speeds that can be compared apples-to-apples. Let's quickly explore the summary speed statistics for each font.

As you can see, the average speeds for both fonts (325.3 and 327.9 words per minute, respectively) were virtually identical with non-Bionic Reading actually clocking in approximately 3 words per minute faster. In percentage terms, however, this is a negligible 0.8% difference.

In plain language, this says the opposite: participants in our sample read on average 2.6 words per minute slower with Bionic Reading than without.

In plain language, we almost got a statistically significant result suggesting that Bionic Reading is slower. As mentioned in the introduction, however, we're talking about such small magnitudes here (less than 1% difference) that you can probably walk away with the conclusion that Bionic Reading simply has no effect.

Up until this point, we've been testing reading speed without regard for reading comprehension. Let's quickly explore the summary comprehension statistics for each font.

Like reading speed, comprehension across fonts was virtually identical. In fact, these comprehension numbers were so close that I feared I messed something up. That said, I triple-checked my calculations and they're correct.

These results correspond with common sense and the existing body of research showing that reading comprehension is inversely correlated with reading speed. The faster you read the less you remember and, conversely, the slower you read the more you remember. Because the reading speeds for both fonts were nearly the same in this experiment, we'd expect to see similar comprehension, which is exactly what happened.

Based on the data collected, it's hard to find any evidence whatsoever that Bionic Reading has any impact on reading speed or reading comprehension. Instead, our results seem to corroborate prior research that there's no universal best font, but idiosyncratic configurations might lead to gains on an individual level.

For more on this, see Accelerating Adult Readers with Typeface: A Study of Individual Preferences and Effectiveness and Towards Individuated Reading Experiences: Different Fonts Increase Reading Speed for Different Individuals (both by researchers at Adobe).

Based on the above, you might be thinking: Well then who cares whether Bionic Reading truly lives up to its claims so long as some people like it? Who cares if it's probably just a placebo? It's just one more font. Give the people what they want!

One thing that might not be obvious is that despite my casual usage of the word "font" herein, Bionic Reading is definitely not just another typeface that can be simply licensed and installed. Instead, it's more of a font style that requires making an API call to the diligent patent/trademark holder (and remunerating said IP holder) followed by the injection of all kinds of tags into your markup.

To give you an idea of what this looks like, here's the first sentence of a Paul Graham article with Bionic Reading applied:

Here it is without:

As software developers, is this a dealbreaker? Of course not. But it sure is cumbersome, particularly when you're building an offline app, so we'd prefer a modicum of evidence that the juice is worth the squeeze before introducing all this cost and complexity.

Another thing that might not be obvious is that — despite any skeptical undertones that might come through in these blog posts — we were sincerely hoping that Bionic Reading would be proven effective. We're in the business of reading technology, after all, and we genuinely believe that software has the potential to revolutionize the practice of reading. We're seeking any advantage digital reading might offer over its analog analog to persuade people to make the switch from paper to pixels. This is our mission and the reason we're building reading software in the first place.

For this reason, and because we had so much fun designing and executing this Bionic Reading experiment, we intend to run some more tests in the hopes of discovering a screen reading technique that yields material benefits. We're aware of a couple other technologies that seem interesting including BeeLine Reader, Spritz, and Sans Forgetica.

Are there any we're overlooking? Let us know on Twitter or Hacker News!

Otherwise, stay tuned for our next reading speed experiment 🤓

Does Bionic Reading actually work? Test for yourself!

July 2022: The results of this experiment have been posted here. tl;dr As a hackathon project at our recent team offsite, Mati and I…